The Charlotte Mint’s brief history produced just over 1.2 million gold coins, with a face value of almost 5.05 million dollars. While there are only 50 coins to make up a complete date set of Charlotte gold, today they are very elusive as survival rates are but a fraction of what was produced form the Charlotte Branch Mint

A combination of the discovery of gold in the southeastern United States in the early nineteenth century and the subsequent political machinations resulting from this newfound wealth led to the establishment of United States Branch Mints at Dahlonega, Georgia and Charlotte, North Carolina. Officially mandated to coin “gold only” by the Congressional Act in 1835, the two branch mints soon opened for business, producing their first gold coinage in 1838. Today, their most tangible legacies are the gold coins themselves, which are among the most avidly collected in all American numismatics. This numismatic loyalty stems from the fact that these “southern gold mints” operated during America’s first gold rush for only a short period of time, 24 years. They produced exceptionally low mintage gold coins with very distinctive characteristics, and had as a backdrop to their demise, the most turbulent conflict in American history, the Civil War. In the numismatic world, nothing could be more romantic.

One unique characteristic that the Dahlonega and Charlotte gold coins possess, is often a greengold cast due to the alloy’s high silver content and are typically struck on irregular planchets. As unappealing as this may sound to a novice, these traits give the coins charm and character like no other.

Gold was found all the way from Virginia to Alabama, and a particular rich belt was discovered on Cherokee Indian land in Georgia, near what was to become Dahlonega in 1828, causing a huge influx of miners. This gold belt also continued from Georgia into North Carolina. There were several private coiners, including Templeton Reid and the Bechtler’s, that had attempted to alleviate the problem of converting the raw gold to a more readily accepted medium. There was considerable political pressure for a universally accepted Federal coinage.

On July 27, 1844, the Charlotte Mint experienced its low point when a fire was discovered in the wing of the building that housed the coin presses. The fire started slowly, and there was ample amounts of water in the reservoirs in the upper story of the building, but the water was not used. This resulted in an almost complete destruction of the building and its contents.

After the election of 1844, President James K. Polk, with known ties to Charlotte’s Mecklenburg County and a “hard money” advocate, spurred on rebuilding the severely damaged facility. Due to the extensive damage, only the steam engine and a single coining press was all that could be salvaged. The Superintendent, G. W. Caldwell, directed that the reconstructed facility only have one story above the basement. 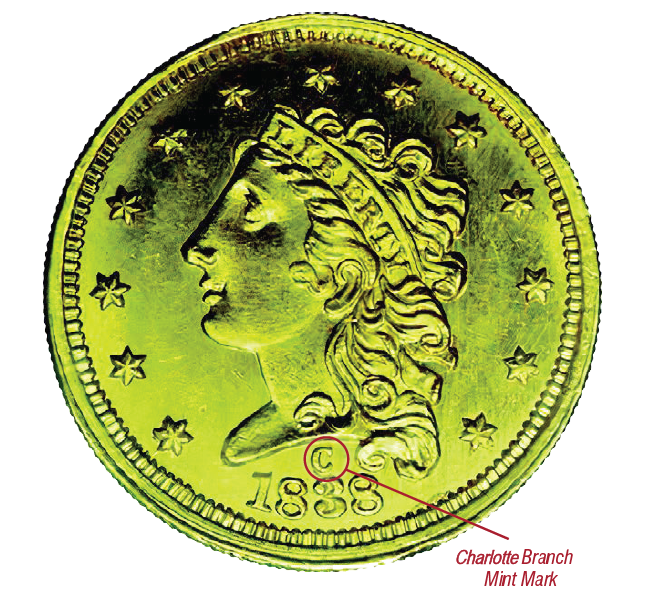 He also instructed that operation could proceed with only a single coining press and oversaw the resumption of coinage in October 1846.

In late March 1847, Superintendent Caldwell resigned from his position to become Captain in the U.S. Army during the Mexican-American War. At that time, William Alexander, who directed the striking of the first gold dollar at the Charlotte Mint replaced him in late June 1849. Following the election of President Franklin Pierce in 1852, former Superintendent G.W. Caldwell was reappointed to his previous position in April 1853, where he remained until the Charlotte Mint ceased operations.

In January and March 1861, only two $5 half eagle coinages were produced, amounting to only 3,948 pieces, following an order from North Carolina Governor John Ellis, to turn over all mint property to the State, pending its secession from the Union. In late April and late May 1861, additional striking of $5 half eagles were struck, consisting of mere 2,044 and 887 coins, respectively. The 1861 $5 half eagles marked the end of the facility’s history as a United States Branch Mint. The 1861-C $5 half eagle is regarded as one of the rarest and most important U.S. issues.

The Charlotte Mint’s brief history produced just over 1.2 million gold coins, with a face value of almost 5.05 million dollars. While there are only 50 coins to make up a complete date set of Charlotte gold, today they are very elusive as survival rates are but a fraction of what was produced form the Charlotte Branch Mint. Although mintages are extremely low for Charlotte issued gold coins, the mint issued $5 half eagles in each year of operation (1838-1861), except for 1845, for a total of only 23 coins in the Charlotte $5 half eagle series. $2.5 quarter eagles were produced from 1838-1860, except for years 1845, 1853, 1857, and 1859, bringing the total number of coins in the quarter eagle series to only 19 issues. Charlotte gold dollars were struck from 1849-1859, except for 1854, 1856, and 1858, for a grand total of only 8 total issues. Interestingly, from 1856-1860, the Charlotte Mint alternated striking between quarter eagles in the even years and gold dollars in the odd years. Unlike the Dahlonega Mint, the Charlotte Mint never struck a $3 gold piece, although a pair of $3 dies were sent to the facility in 1854.

The Charlotte Mint was used for various purposes during, and after, the Civil War. In 1868, the facility was opened to be used as a U.S. Assay office, a final attempt to restore its former status as a U.S. Branch Mint, but succumbed in February 1873. During subsequent years, it was used as a Federal courthouse, headquarters for Red Cross during World War I, and a meeting place for the Charlotte’s Women Club. In 1932, the old mint structure was ultimately demolished in an expansion of an adjacent Post Office building. In October 1936, it was later reconstructed in a new location in Charlotte becoming the Mint Museum of Art, where it still remains today. 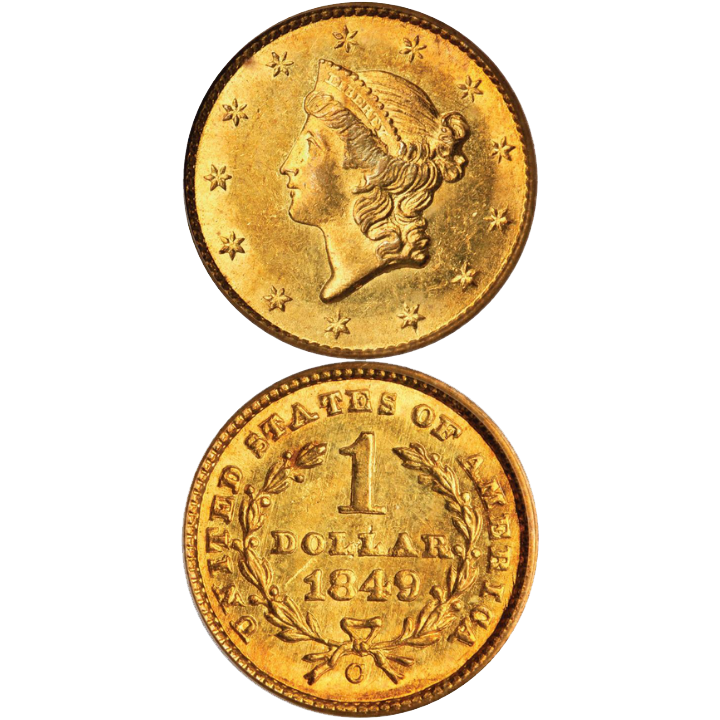 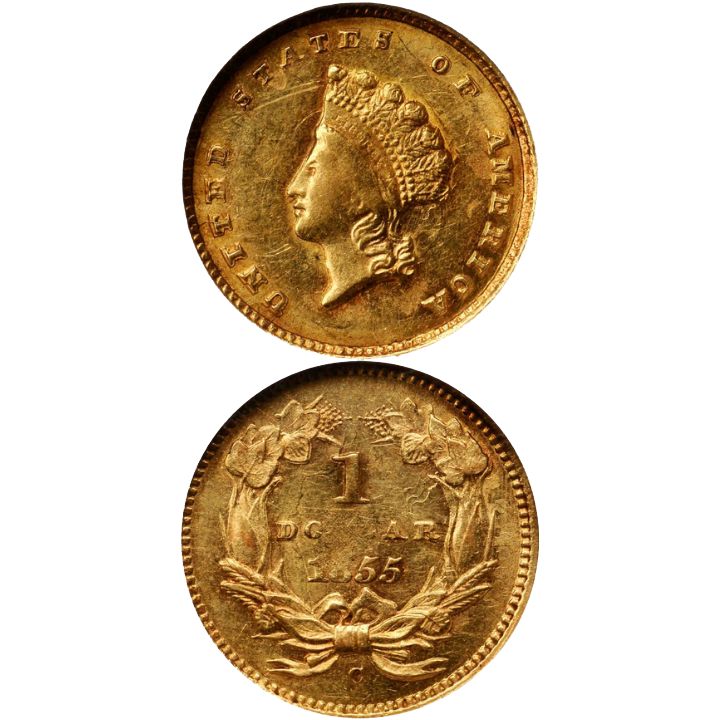 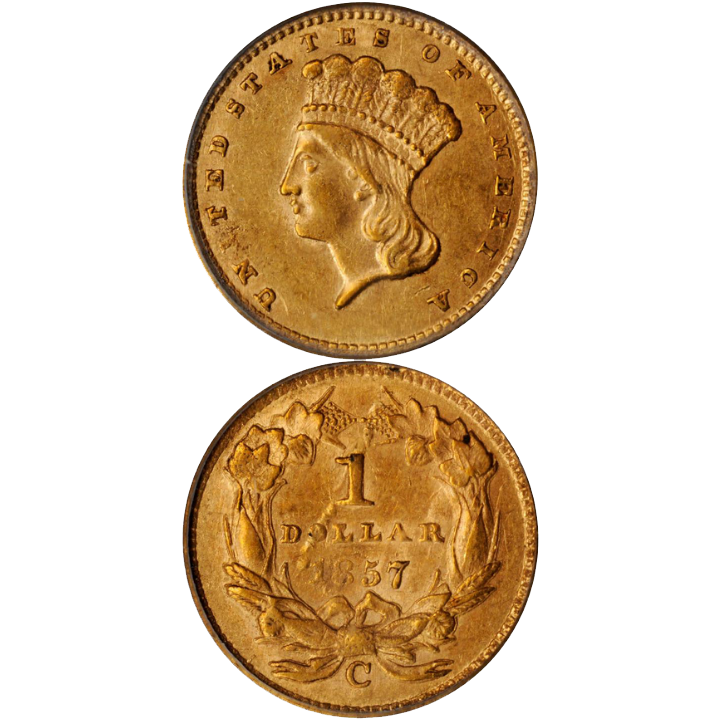 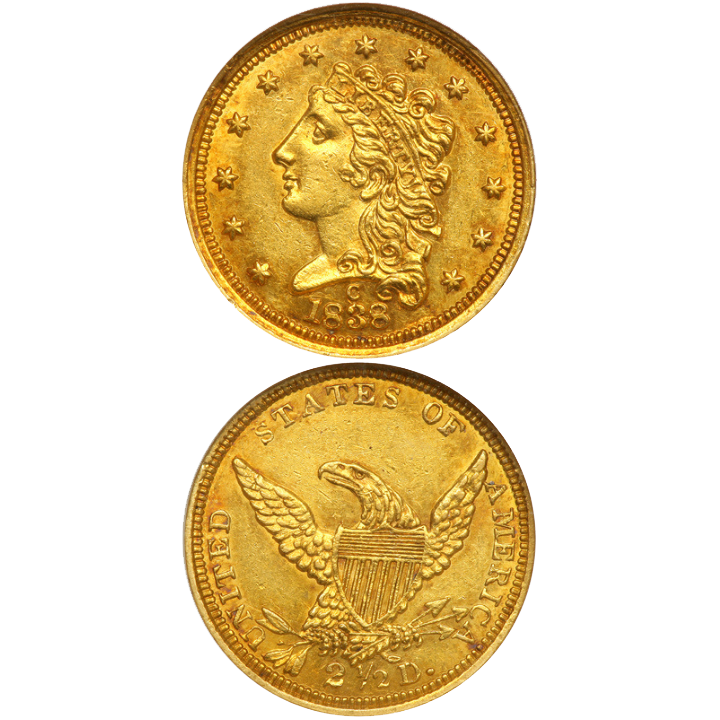 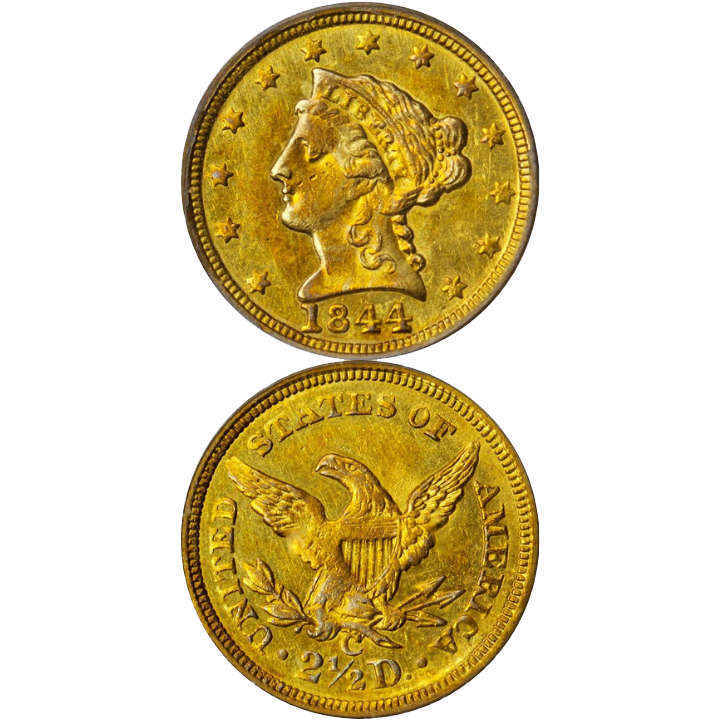 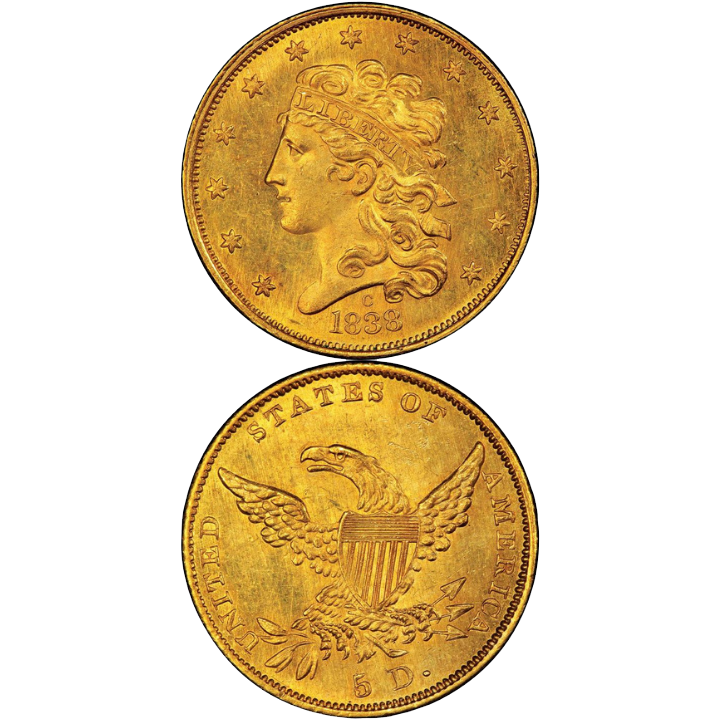 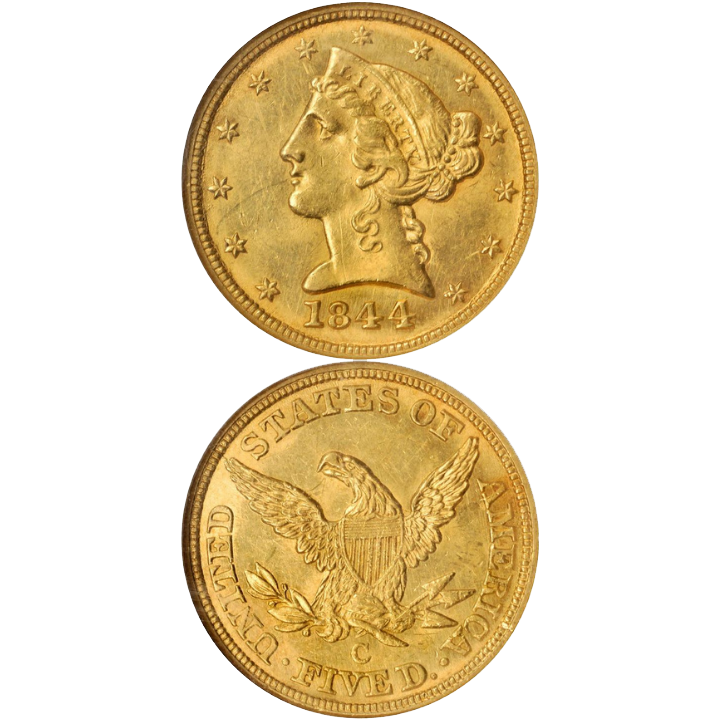 Collecting Southern Branch Mint gold can be challenging as each issue is considered rare to extremely rare. There are many ways to collect and invest in southern branch mint coinage. The most basic form is the 3-coin Type set. The 3-coin type set consists of an example of each denomination, excluding the different types. It is easily attainable depending on which issues and grade you desire. Most importantly, it allows opportunity to continue expanding your collection over time if you choose to do so. Most collectors and investors that choose this route, often accompany their Charlotte Mint issues with the Dahlonega and New Orleans basic type sets. All three branch mints are known as “Sister Mints” and created together as acting branches of the Philadelphia Mint to service the southern states. 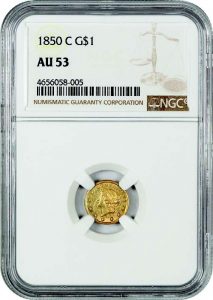 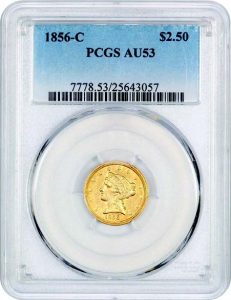 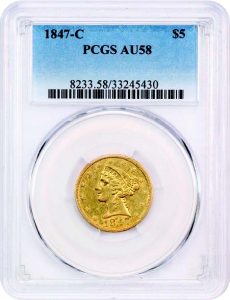 The 10-coin type set is of course more elaborate, consisting of one coin from each major denomination and design. This set is wildly popular, but requires a little patience assembling. Accomplishing the 10-coin type set is of course extremely rewarding, but can be difficult depending on the issues you desire. Remember, all issues are rare, but some are extremely rare and can take some time to acquire them. 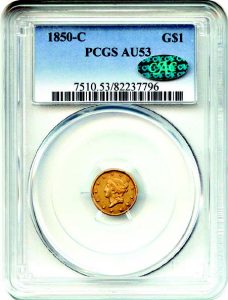 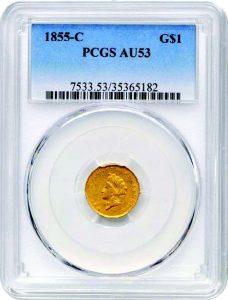 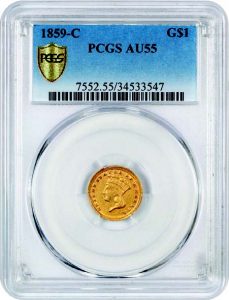 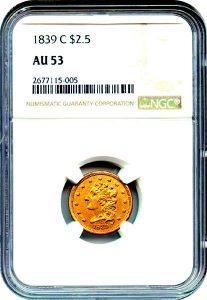 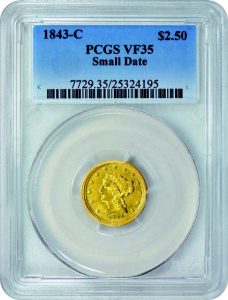 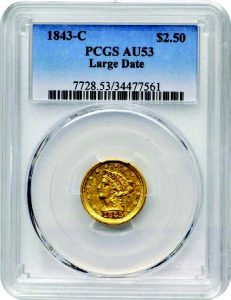 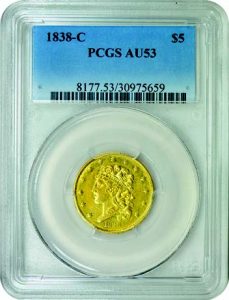 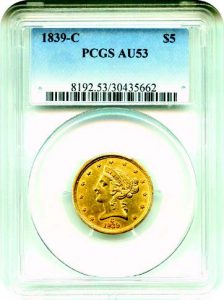 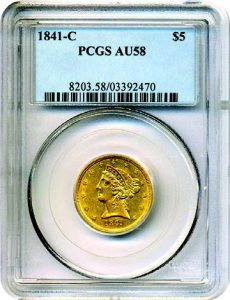 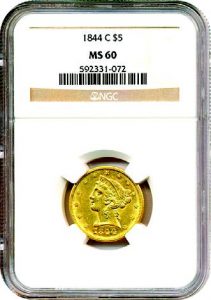