Many entering the coin market for the first time are often troubled on what to buy or collect. Since the middle of the 19th century, the United States produced many different coin series, displaying the culture of that time along with different weights and sizes accommodating the price of gold. The United States began striking its first gold coinage in 1795, with the infamous Capped Bust $5 half eagle and $10 eagle. Since that time up through 1933, coins were issued across the country from various mints.

The 12-coin vintage U.S. gold type set is one that most enjoy collecting, especially for beginners who would like to own some of the United States’ most precious artifacts shrouded in rich history. The United States executed the largest retraction of gold coinage to be melted when President Franklin Roosevelt signed the Executive Order of 1933, banning U.S. citizens of privately owning gold coinage. Today, vintage pre-1933 gold is highly collectible, due to most being destroyed, leaving a very small amount of coins for collectors and investors to enjoy today. The 12-coin American gold type set has gained popularity, as it can be tailored and assembled no matter the size of the pocket book. People buy for different reasons, such as wealth protection or for the enjoyment of the history itself. Whether you want to collect the more affordable common dates, or the more coveted issues that require patience and deeper pockets, Paramount Rare Coin has the resources and expertise to accommodate exactly what you
would like to accomplish. 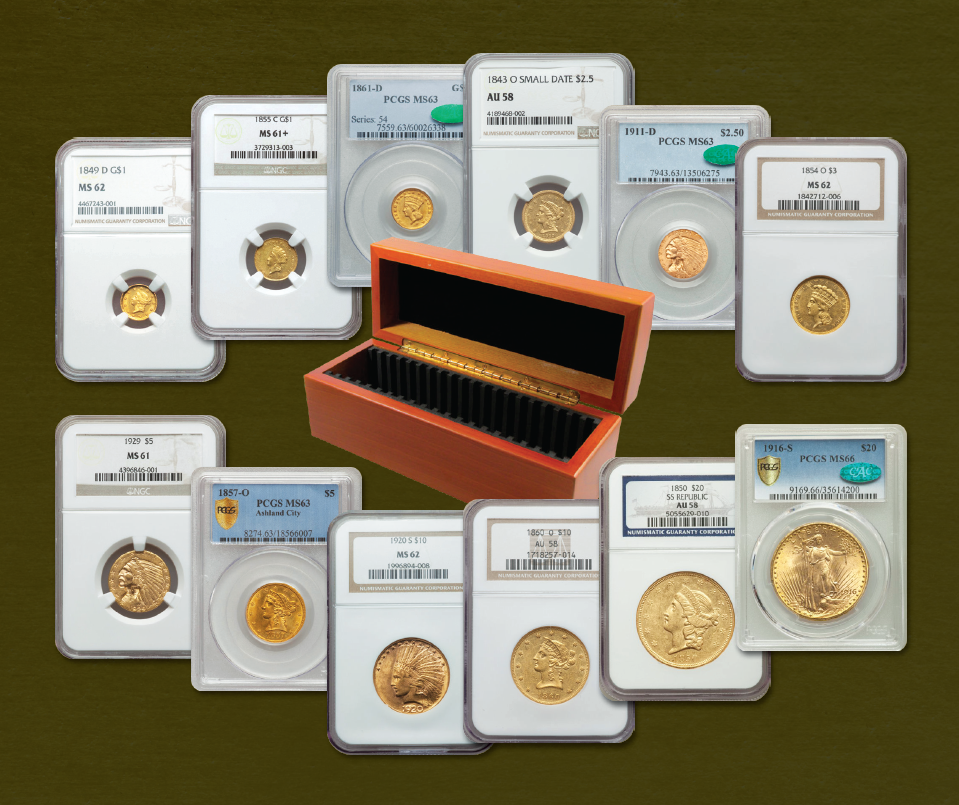 There are many ways to collect the 12-coin American gold type set. It can be assembled by collecting coinage of different
mints, dates, or even by the grade alone. Either way, the path you choose can be challenging. One of the most popular type sets to assemble are the U.S. Mint type sets including coins minted from the infamous southern branch mints of New Orleans, Charlotte, and Dahlonega mints. The histories of the southern branch mints are astonishing and have gained notoriety on a world scale. Unbeknown to most, the first gold rush in the United States took place in the early 1800’s, on the southeast coast, where large gold deposits were found in North and South Carolinas into Georgia. At that time, the gold had to be transported a dangerous month’s long journey to the “Mother Mint” in Philadelphia. There were few roads and many rivers to cross, encountering Indians and robbers along the way. Many journeys ended badly as the loads of gold were lost along with many lives. After years of lobbying Congress for branch mints in the south, in 1838, the Charlotte, Dahlonega, and New Orleans mints were opened.

The original Gold Eagles from 1795-1834, were minted in British standard crown gold, or 22 karat gold, and later changing to .900 fine gold by the Act of January 18, 1837 to accommodate gold’s higher value. The American gold type set consists of the coins that were issued between 1838-1933. Coins issued prior to 1838 are considered “early United States gold.” Although the denominations were the same, there were many design and diameter changes throughout the early gold series due to gold’s increasing value. The 12 denominations making up the 12-coin American gold type set are as follows: the Type I $1 Gold Liberty Head, Type II $1 Indian Princess Small Head, Type III Indian Princess Large Head, $2.5 Coronet Liberty quarter eagle, $5 Coronet Liberty half eagle, $10 Coronet Liberty eagle, $20 Coronet Liberty double eagle, $3 Indian Princess Head, $2.5 Indian Head quarter eagle, $5 Indian Head half eagle, $10 Indian Head eagle, and the $20 Saint Gaudens double eagle. The collection of all 12 coins make up a complete American Gold Type Set, but once that point is reached, you can easily add to the type set by being more precise and acquiring the types imbedded in a series, such as coins possessing the Motto, “In God We Trust,” and the coins without the MOTTO. The different types will be explained in further detail later, but building the core of the American gold type set is first and foremost. If you decide to expand the horizons of your collection, there are plenty of opportunities to do so.

The American gold type set is the most popular area of collecting, giving the collector or investor an example of each
denomination the United States used for day to day commerce while on the Gold Standard. Each coin has its own story, allowing
the imagination of the beholder to run free, from the history of the Wild West, the Civil War, and even the trying times of recessions that have taken place throughout history. Paramount Rare Coin has specialized in assembling collections spanning over the past two decades. We have the resources and expertise to help you locate the right coins for the legacy you leave behind for family members to enjoy for years to come.